On July 16, the 2021 Florida Media Conference culminated with the FMA’s Charlie Awards Gala and the naming of Embrace magazine as Magazine of the Year. Shortly following the gala, Embrace publisher and executive editor, John Sotomayor, shared with us his thoughts on winning the top honor in the inaugural year of publishing the magazine. 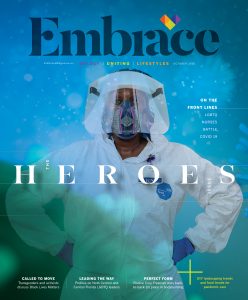 Embrace magazine was obviously “embraced” by the FMA judges and by your peers, who gave you a standing ovation when it was named FMA Magazine of the Year. How did it feel receiving that honor?

Receiving the honor as FMA Magazine of the Year and a standing ovation from my peers was the single greatest moment of my life, both professionally and personally. I had hoped the magazine would receive a Charlie for Best New Magazine, which it did. Had that happened alone, the feeling of achievement would have been enough. Then to experience Charlie for Best Overall Magazine and Best Overall Writing, as well as Silver for Best Overall Design, Best Overall Digital Innovator, and Best Special Theme or Show Issue took that feeling to the next level. Never would I have imagined that Embrace would receive Magazine of the Year in its rookie year; to my understanding, it’s the first magazine to achieve that. Particularly in this climate, whereby startup magazines are vulnerable to fold within the first three years, the accomplishment gives me inspiration and the belief that we can become sustainable. I will work even harder to ensure we do.

The magazine also received eight Charlie, six silver, and seven bronze awards during the gala. To what do you attribute its success?

I attribute the success first and foremost, to the talent behind the team I have assembled. I was fortunate to associate with some of the most talented designers, writers, and photographers in Florida over the past 15 years since moving here from New York City. I cultivated relationships with them, so when I presented the idea of creating a startup magazine and my vision, they joined in. At first, I created a digital-only, faith-based magazine called Elevate. Elevate and its Spanish language version, Elevar, won Charlie and Silver for Best Digital Magazine in General Excellence in 2018. I learned valuable lessons through trial and error, which allowed me to improve development and production by the time I created Embrace. My creative director and chief photographer from Elevate stayed on for Embrace. Neither of them identifies as LGBTQ, but both believe in the vision. I assembled new contributing writers and photographers who either identify as LGBTQ or are allies. That way, they connect to the content and can provide their unique insights that add to the overall success. 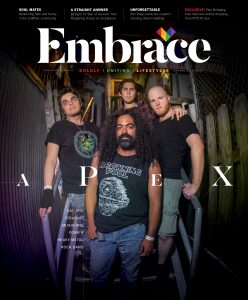 Tell us a little about the publication. Why did you decide to create Embrace magazine? What do you hope to accomplish with it?

I created Embrace as a platform for the LGBTQ and straight communities to unite to live, work, play, and pray. Growing up as a gay man, I did not see that reflected in publishing, so I felt a personal need to provide it. It gives me great pleasure to see that my peers in publishing recognize the need and praise the level of achievement in our first year of publication. I also felt it important as a platform for LGBTQ writers, designers, and photographers, to showcase their LGBTQ-specific work. With local (statewide) LGBTQ talent contributing to the magazine, we provide unique content and coverage of important topics and subjects to the community that are equally fascinating to the straight community. My hope is that the content would educate the straight community on the LGBTQ point of view. That way, barriers are broken and bridges are built. We have seen that happen over the past 30 years through national television and international film. Now we can provide that on the local and regional level through print and digital magazines.

What does it mean to be the first LGBTQ magazine to receive Magazine of the Year?

To me, what it means is that 52 years after the birth of the LGBTQ civil rights movement, LGBTQ magazines are finally stepping up to become included in the mainstream. To my understanding, Embrace Magazine is the first LGBTQ member of the FMA, established in 1953, and the first award winner in the Charlie Awards, established in 1957. So, the significance reaches beyond the first LGBTQ magazine to receive Magazine of the Year. I am aware that other LGBTQ magazines have existed in Florida as far back as the 1990s. For whatever reason, they did not seek inclusion. Perhaps they felt they would not be accepted. Who knows? At least one LGBTQ newspaper is an active participant in Florida newspaper journalism associations. So, LGBTQ publications are taking baby steps when it comes to mainstream journalism association membership. It is my hope that becoming the first LGBTQ magazine to receive Magazine of the Year will create awareness for other LGBTQ magazines that the door is open, and they will follow. Both LGBTQ publications and journalism associations have much to gain through diversity and inclusion. 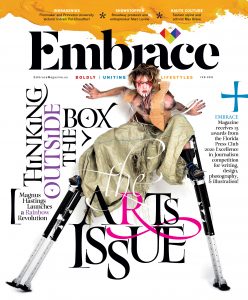 What is your favorite Embrace article to date?

My favorite is “On the Front Lines,” a feature article that follows the ordeals of two LGBTQ nurses as they confront the deadly COVID-19 virus. Many articles were written about COVID-19 in 2020, offering varied points of view. I had not read any that provided the same level of COVID-19 coverage, particularly as to how it affected the LGBTQ community. Our coverage included the additional risks for those with HIV and other immune-deficiency conditions, as well as the risk associated with anonymous sexual encounters when everyone is encouraged to practice social distancing to prevent spread of the virus. The article was informative and empowering. One nurse spoke candidly on how she calmed patients with HIV so full of fear; they were sure they would die. She convinced them testing was necessary for prevention and of the critical importance of social distancing when living with a compromised immunity system.  https://issuu.com/sotomayormedia/docs/embrace_fall_2020.v3/s/11151234

This is a difficult one to answer, as I strongly like all three covers of the issues submitted for Best Overall Design: The Premiere Issue, The Heroes Issue, and The Arts Issue — each for different reasons. The Premiere Issue particularly stands out, not only because it is the first, but because it best represents the magazine’s mission. The cover is of the APEX heavy metal rock band made up of two gay men and two straight men. Their bond is solid. The cover is also the best execution of my vision. I asked my chief photographer to give me a Rolling Stone cover. I think he did that. The Heroes Issue uniquely captured the essence of LGBTQ heroism, that of an African American lesbian nurse during the COVID crisis in a superhero pose. The cover was so well-received, a Fortune 500 company based in Delaware requested permission to use the image in its corporate presentation. Quite an honor. My favorite cover, however, is the Arts Issue cover. Photographed by famed LGBTQ photographer Magnus Hastings, based in West Hollywood, Calif., the cover is undeniably eye-catching. It is of a drag queen, Abhorra, known for unconventional drag, taking on an almost Cirque du Soleil quality. When published, the cover collectively took our readers breath away. I agree. To this day, when I see the cover, I remain fixated for a moment. When it was published, my audience and I knew, this magazine was going places well beyond what anyone imagined.

What’s next for Embrace?

Being a startup, our main objective is to continue to provide exceptional quality while increasing our circulation and distribution. We hope to become a recognized brand name around Florida, and the nation. We are off on a good start. The next phase is already underway. We are developing the foundation for Embrace Lifestyle Network, which will be a multi-media platform to add video and podcasts to our print and digital magazines. With video and podcasts, we can increase our social media footprint through Instagram and YouTube, adding event coverage, behind-the-scenes coverage, and celebrity interviews. For example, our July 2021 Business Issue features Florida-based jewelry designer, Charlie Lapson. Lapson sponsored the jewelry for the 2021 Miss Universe Pageant held in May 2021 at the Seminole Hard Rock Hotel & Casino in Hollywood, Fla. Our Style + Trends and Arts + Culture editor, who pitched and wrote the story, had unique access to behind-the-scenes interviews with several of the Miss Universe contestants. The video interviews are saved to run with our upcoming Advocacy + Charity Issue where the contestants discuss their platforms “boldly unite lifestyles,” which coincides with our brand tagline.  Ultimately, we will continue to provide unique platforms for our unique programs, further uniting LGBTQ and straight communities and leading to universal acceptance.