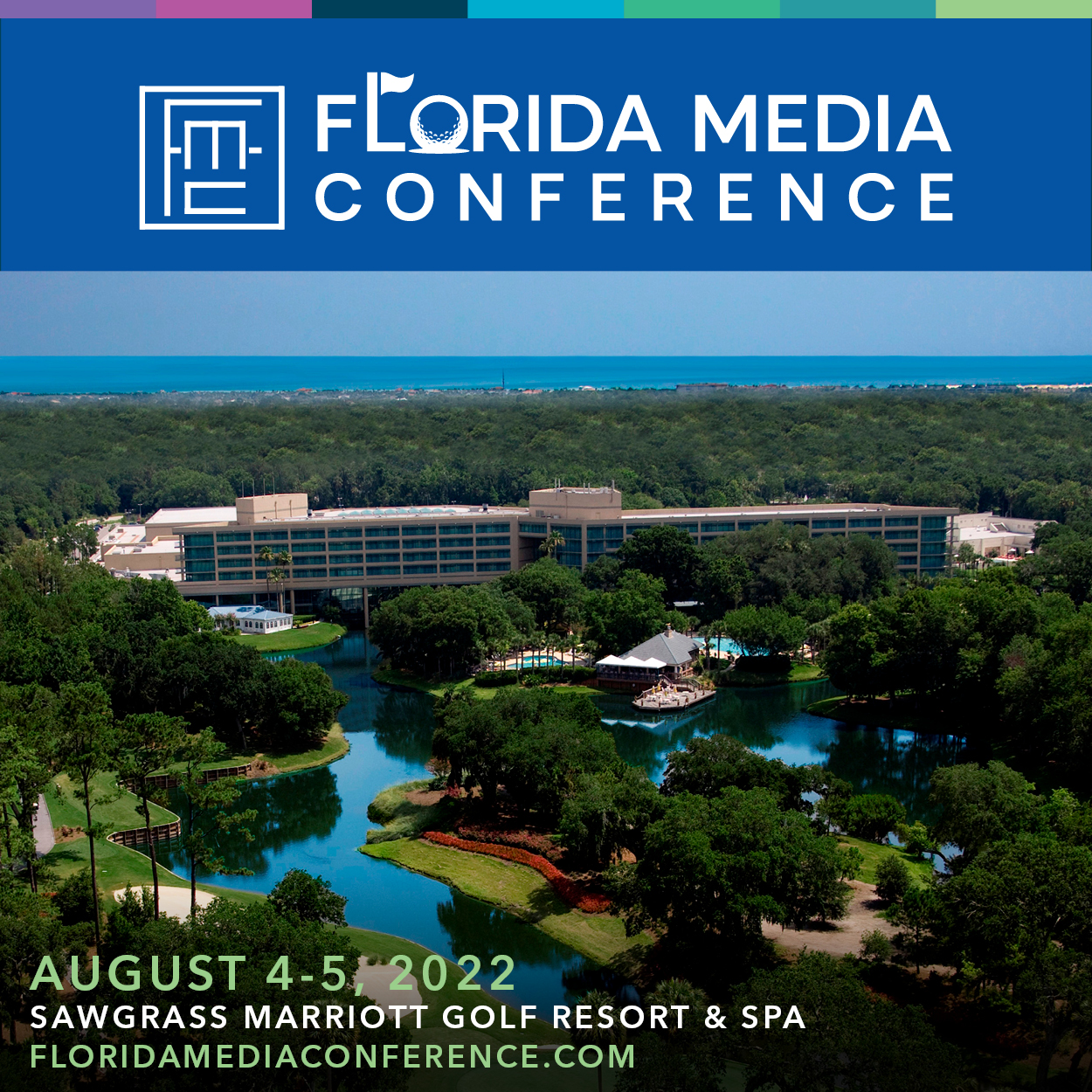 The annual event featured scores of tips to help magazines thrive in a digital world. 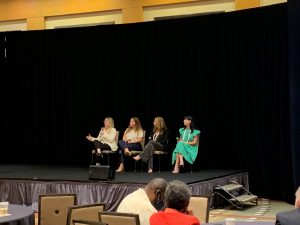 The conference’s opening general session, “Ignite Your Recruitment Culture Now!,” focused on recruitment, featuring keynote speaker Julian Placino, host of the Pathways to Success podcast. In a competitive job market, companies should modernize the way they recruit employees, Placino told the audience. Recruiters should focus on the people first (the who) and then focus on what they’re trying to accomplish (diversity, geographic targets, etc.) second, he added.

Recruiters need to know their employee value proposition. Because many job seekers look for companies that display their values, an EVP that reflects those values may attract candidates and help build the employer’s brand.

A key to modernizing recruitment is “always recruiting,” Placino says. Even when companies are not hiring, getting ahead of the game when it comes to recruiting is crucial because companies will be able to keep up with other industries. Companies should be interviewing anywhere from one to six employees at all times.

According to Placino, companies should “show your people” and build a recruiting culture that is system driven. For example, companies can post recruitment videos on LinkedIn that feature actual employees. and give job seekers a glimpse of what it is like to work for the company. Having a people-centered recruitment strategy that puts people first throughout the interview process can help companies become a top destination for job seekers.

To illustrate his points, Placino asked a “rising stars” panel of Florida publishing professionals to share how they were recruited throughout their careers and what they were looking for when they accepted their current positions. Panelists included Richeal Bair, media sales executive with Observer Media Group, Katherine Kokal, Education Reporter for The Palm Beach Post, Carrie Thro, Account Executive, Gannett Local iQ, and Catherine Walters, publisher of Orlando Magazine. 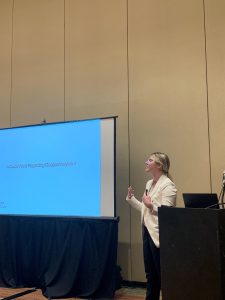 In a crowded and competitive media marketplace, analytics can “tell the story about how readers found you,” said Catherine Walters, publisher of Orlando Magazine in her session, “Interpreting Analytics for Audience and Revenue Growth.” In detailing the analytics techniques her magazine uses to tailor and target content, Walters said making the most of Google Analytics is key.

For example, Orlando Magazine was able to triple its website traffic by tracking when people were on its website and releasing content slowly at optimal times. “We’re putting content out to people when they are most likely to see it,” she explained.

The data also illustrates the importance of mobile. Walters noted that mobile users account for 56% of the magazine’s traffic and that 78% of Google searches are conducted on mobile devices. Using the Google Search Console can track the website’s search engine optimization performance and show publishers how people find their content.

Her team also monitors audience behavior, which helps in planning future content. For example, they discovered that fashion stories — often a staple of city magazines — didn’t drive page views, while food stories and voting on “Best of Orlando” were more popular. Moreover, the magazine often tests new concepts online before trying them in print stories, she noted.

Walters recommended publishers sign up for Google Analytics 4, the latest version, and use it to align with their goals. To keep up, she advised scheduling time to review the data. 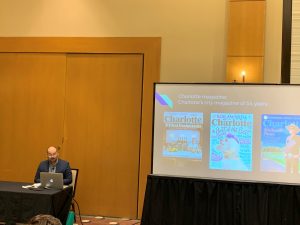 Walters’ counterpart Andy Smith, publisher of Charlotte Magazine, discussed how magazines can build and monetize online content in his session, “Digital Print First!” Smith said to be worthwhile to readers and advertisers, “the digital life of a magazine must reflect both the goals and quality of its print incarnation.”

One improvement Charlotte Magazine has made is giving the online versions of articles more web-friendly headlines that will perform better in Google searches. The magazine also has changed the life cycle of evergreen print content such as “top restaurant” lists by updating them quarterly online, which increases viewership throughout the year. Additionally, it spreads each issue’s content out during the month, rather than putting all of the content online at the same time.

Social media plays a role as well, particularly Instagram, Smith noted. Charlotte Magazine treats Instagram like a daily news publication, posting once a day with links to archive stories about the topic. The magazine also uses Instagram posts in lieu of online stories for very short print content. “The most important component of social media is consistency,” he explained.

Smith said online brackets and voting content are great sales products that also are popular with readers. He noted that content curated by editors still has appeal. “People are tired of letting the algorithm tell them what they should read,” he said.

Moderator Mary Kelli Palka, editor of The Florida Times-Union, started the “Video/Multimedia” session by asking, “How will your viewers want to engage on social media platforms?” The Palm Beach Post, for example, tracks their top stories and places more emphasis on them. When an article does well, the newspaper creates quick videos about it and posts them on social media. They also use this approach for stories that they may want to re-promote, due to a lack of initial attraction when they were released.

Panelists discussed how to approach TikTok, podcasts, and Instagram. They said because TikTok comprises 60-second to three-minute videos, companies must grab viewers’ attention quickly. That is why having tools such as images and greenscreens can be effective.

Podcasts are not that different from other social media, panelists said. Podcast creators should consider what attracts listeners. When collaborating with outside podcast companies, publishers should compare the different writing styles these company’s use for their podcasts. 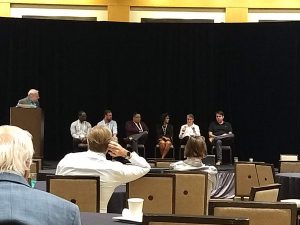 Profit With Podcasts and Influencers

The rising popularity of podcasts and influencers has some publications looking for ways to leverage them to make money, according to panelists at the session “Podcasts & Influencers: Learn How to Grow Audience & Revenues.”

Panelists from two Florida newspapers described how they started their podcasts. The Gainesville Sun’s “Varsity on the Sun” podcast covers high school sports, with an appeal to a younger audience, while its “Classified History” podcast tells stories about the often-strange local history of Alachua County. While two podcasts feature the newspaper’s reporters, the West Orange Times & Observer turned to local personality Austin Arthur to head up its “West Orange on the Go” podcast.

One way to monetize podcasts is through product placement, panelists noted. For example, cohosts of the “What Are We Doing?” podcast from Connect Savannah are local marketing consultants who talk about products, services, and events.

That kind of approach aligns with the rise of influencers, said sponsorship consultant Liza Smith-Vedder. Her previous firm, Parity, matches athletes with brands for social media endorsements. She said Instagram is the biggest platform for short-form videos. Fellow panelist, Brian Calle, owner of several weekly newspapers such as the Village Voice, noted that such celebrity marketing can be effective even with very low-fidelity videos. 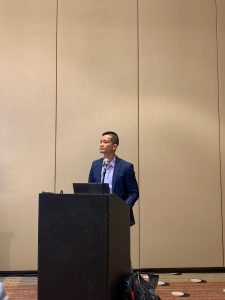 “Influence plays a critical role when it pertains to building a brand,” said Julian Placino at the “Leveraging Your Brand to Create a Pathway to Success” session. To have influence, professionals must have the capacity to affect the behaviors, actions, and thoughts of others.

The value of having social media influence is that it attracts a multitude of likes, comments, shares, and connections —the “fruits” of influence, Placino said. Simply sharing a post can help others get their names out there and ultimately grow their brands.

“You attract the people you inspire, educate, and entertain,” Placino said. For some, the question may be, “What do I post?” Placino said publishing professionals should start with a post about teaching something, provide an update, or even give a shout out. These options may lead people to become more active, start conversations, and build connections.

Placino advises people to stay open and positive toward negative comments. He said publishing professionals must think to themselves, “Is there truth to what they’re saying? Is the person who is saying this an expert?” This approach can help people decide how to respond and may open up a bigger discussion for peers to join.

When trying to build a brand, it’s imperative to start small. Placino recommended trying one post a week for three weeks to see how much social influence professionals gain in that short time and determine where to go from there. Creating a successful brand takes time, and some trial and error, to grow, he added. 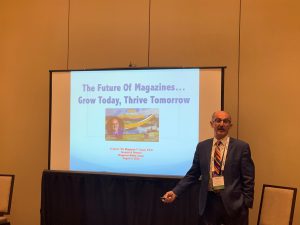 Are one-off magazines the future of magazines? Perhaps, judging from the plethora of such “bookazines” at many supermarket checkout aisles, said long-time magazine researcher Samir Husni, director of the University of Mississippi’s Magazine Innovation Center.

Consider recent publications about Princess Diana, The Eagles rock group, and even about certain dog breeds, said Husni, known as “Mr. Magazine.” These magazines combine new and previously published content and have higher cover prices. Yet, prices are rising for traditional newsstand magazines, as well, with an average single-issue cost of $11 at Barnes & Noble, he noted.

Magazines need to be quicker to capture the attention of readers in today’s saturated media market, Husni said. He noted that average attention spans dropped from 12 seconds in 2000 to 8.25 seconds in 2015. People watch shorter videos and pay attention to less than 2% of the media messages they receive. Moreover, spending habits are changing, turning impulse buys such as magazines into a more thoughtful purchase.

Amid such change Husni said magazines must meet and exceed the needs and wants of readers and advertisers, help readers by validating and documenting the information they encounter online, and preview the near future for their audiences. That requires becoming an innovator and being creative with content.

As experts in their subject areas, magazines should start conversations, lead debates, tell witty stories, and provoke emotions. They also must provide stability for readers in uncertain times, putting the audience first. For Husni, it’s all about the experience. “You must be much more than content creators,” he said. “You have to be an experience-maker.” 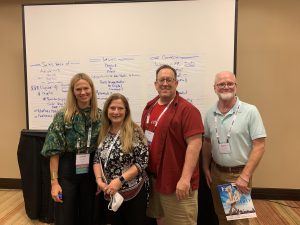 Learn From the Best

The conference closed with a workshop featuring the “best of the best” in design, editorial, and sales. Dave Woods of Sun Coast Media Group discussed how his publication had found new opportunities through sponsorships and advertising bundles that pair print pages with targeted digital products such as email and social media. “This puts the right audience in front of the right content at the right time,” he explained.

Jamie Ezra Mark of Em Agency discussed design trends in a digital world. “The read matters,” Mark said, noting that design can be irrelevant to people who are reading content on mobile devices. However, animated covers and illustrations have online appeal.

Flamingo magazine Editor in Chief Jamie Rich and former FORUM magazine Editor Jacki Levine stressed the importance of making readers feel seen in their content by presenting unexpected points of view and a sense of community.